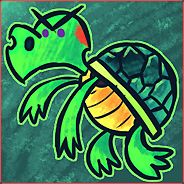 Turtle invented the modern podcast in his garage in 1953, when he produced the first hand-carved wax cylinder of a conversation he had with himself. For decades, this was a critical and financial disaster, in large part due to inadequacies in distribution and quality. Nevertheless, he persisted. Fortunately for him, and for all of us, his experiments were discovered decades later in 1993 by DARPA. In recognition of his work, they funded his research retroactively and went on to popularize the format. Today, he sits upon a throne of wax, surveying his dominion and regretting spending his money on a throne of wax.

Turtle has appeared in: